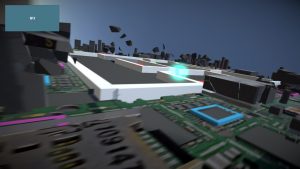 An arcade – logical platform game. It’s unfinished. The idea was that when you die, you reborn and your ghost too. He can help you or disturb you, so think about future moves. After a few deaths you have more ghosts. Every constant amount of time the level rotates, so you can enter places which were unavaliable… The example level which we’ve done, contains 5 switches. It was designed that you switch one of them, your ghost another one and so on, and then the exit for next level is opened. Every switch the city around falls apart a little bit.

We was short on time, jam was only 24 hours long, and gameplay mechanics was evolving whole the time and finally it was meant to be singleplayer logical game instead of multiplayer shooter… :/ Gameplay doesn’t make any sense, you can’t win or lose and ther is not enough graphic assets. Anyway we have learned a lot, and overally had a good time.

I was programming ghostsghosts, level rotating (really, with physics), gameloop and multiplayer. I did a teaser for the game. I was also musican for the first time – I did level music. You can listen to it here:

Read post about what’ve learned on this and other game jam.